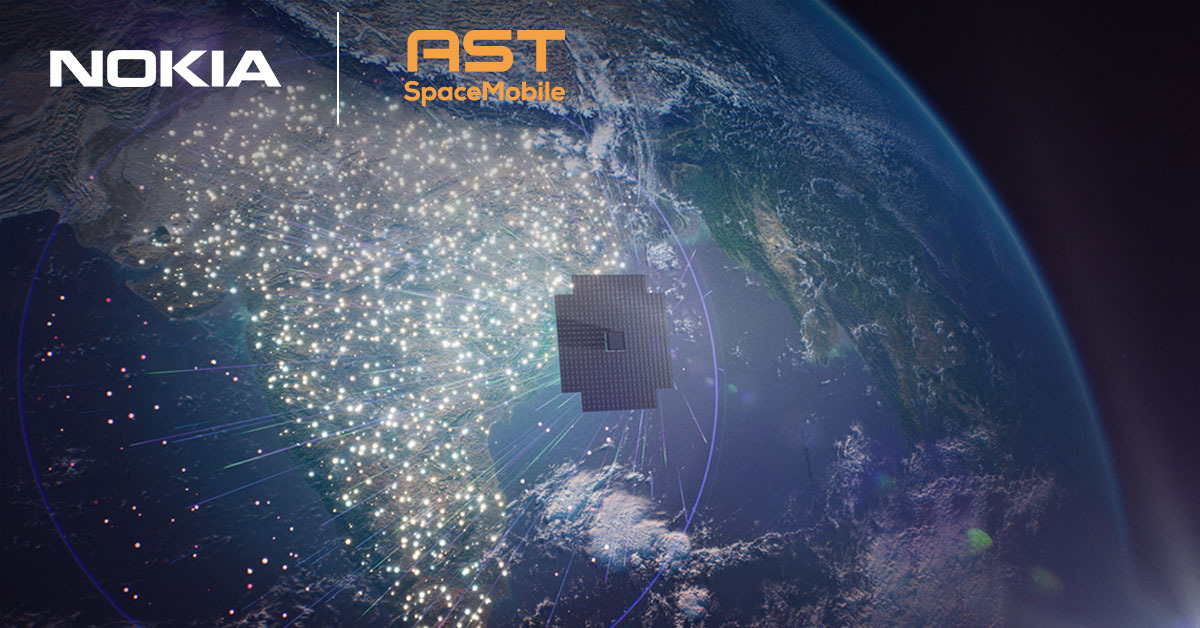 N okia has signed a five-year contract to supply RAN equipment with satellite company AST SpaceMobile as the latter prepares to launch its next satellite to test its new 4G/5G connectivity services with operators worldwide.

Espoo, Finland – Nokia today announced that they have signed a five-year 5G deal with AST SpaceMobile, Inc. (“AST SpaceMobile”) (NASDAQ: ASTS) – the company building the first and only space-based cellular broadband network accessible directly by standard 4G or 5G mobile devices. Under the deal, Nokia and AST SpaceMobile will work to achieve their joint ambition to expand universal coverage and connect underserved communities around the world. The launch of AST SpaceMobile’s BlueWalker 3 test satellite later this year will kick off global testing with mobile network operators on six continents.

“Connectivity should be considered an essential service like water, electricity, or gas. Everyone should be able to have access to universal broadband services that will ensure that no one is left behind,” said Tommi Uitto, President of Mobile Networks at Nokia. “Nokia has a long history of delivering connectivity solutions that have had a major and positive impact on society. We have worked closely with AST SpaceMobile on this important initiative for two years which seeks to provide crucial connectivity from space to underserved communities around the world. We are of course proud our technology is playing an important role in underpinning the networks.”

AST SpaceMobile plans to launch its BlueWalker 3 satellite for testing in early to mid-September from Cape Canaveral, Florida. BlueWalker 3 is a low Earth orbiting satellite and has an aperture of approximately 64 square meters (693 square feet), which is designed to communicate directly with cellular devices via 3GPP standard frequencies. Ultimately, AST SpaceMobile is aiming to deploy approximately 100 satellites to achieve substantial global mobile coverage.

“With the integration of Nokia’s AirScale system, AST SpaceMobile and Nokia are taking an important step toward closing connectivity gaps all over the world," said Scott Wisniewski, Chief Strategy Officer at AST SpaceMobile. “Nokia is supporting us with dozens of engineers and development professionals, including leading architecture research experts at Bell Labs, the world-renowned industrial research arm of Nokia. In the coming months, we are scheduled to launch our BlueWalker 3 test satellite into low Earth orbit, which has a 64-square meter phased array antenna designed for direct-to-cell connectivity. With this satellite, we plan to conduct testing all over the world with leading mobile network operators, leveraging Nokia's technology solutions on the ground.”

Nokia is committed to equitable opportunity for all and access to education, healthcare, jobs, and community digital services. Nokia supports the 2025 targets set by The Broadband Commission for Sustainable Development that aims to ‘connect the other half’ in the next five years. They are involved in several projects underway around the world including in El Salvador and Kenya. These public/private initiatives are designed to bring public services such as schools and hospitals online. They are intended to vastly improve internet access and create the foundations that will enable everyone to participate in the digital economy.

AST SpaceMobile is building a satellite-based mobile broadband network that will be directly accessible by 4G and 5G devices. The company has entered into agreements and arrangements with carriers that will collectively serve more than 1.8 billion subscribers.

The goal of the project is to compensate for connectivity gaps on a global level, which is the joint endeavor of the two companies. Nokia noted that five billion mobile subscribers see a gap in connectivity and around half of the world's population is still unconnected.

“Nokia supports us with dozens of engineers and development professionals, including leading architectural research experts from Bell Labs, Nokia's world-renowned industrial research arm. In the coming months, we plan to launch into low Earth orbit our test satellite BlueWalker 3, which has a 64 square meter phased antenna array designed to connect directly to the cells. With this satellite, we plan to test globally with leading mobile network operators, leveraging Nokia's technology solutions on the ground.”

At Nokia, we create technology that helps the world act together.

As a trusted partner for critical networks, we are committed to innovation and technology leadership across mobile, fixed and cloud networks. We create value with intellectual property and long-term research, led by the award-winning Nokia Bell Labs.

Adhering to the highest standards of integrity and security, we help build the capabilities needed for a more productive, sustainable, and inclusive world.

AST SpaceMobile is building the first and only global cellular broadband network in space to operate directly with standard, unmodified mobile devices based on our extensive IP and patent portfolio. Our engineers and space scientists are on a mission to eliminate the connectivity gaps faced by today's five billion mobile subscribers and finally bring broadband to the billions who remain unconnected. For more information, follow AST SpaceMobile on YouTube, Twitter, LinkedIn and Facebook. Watch this video for an overview of the SpaceMobile mission.