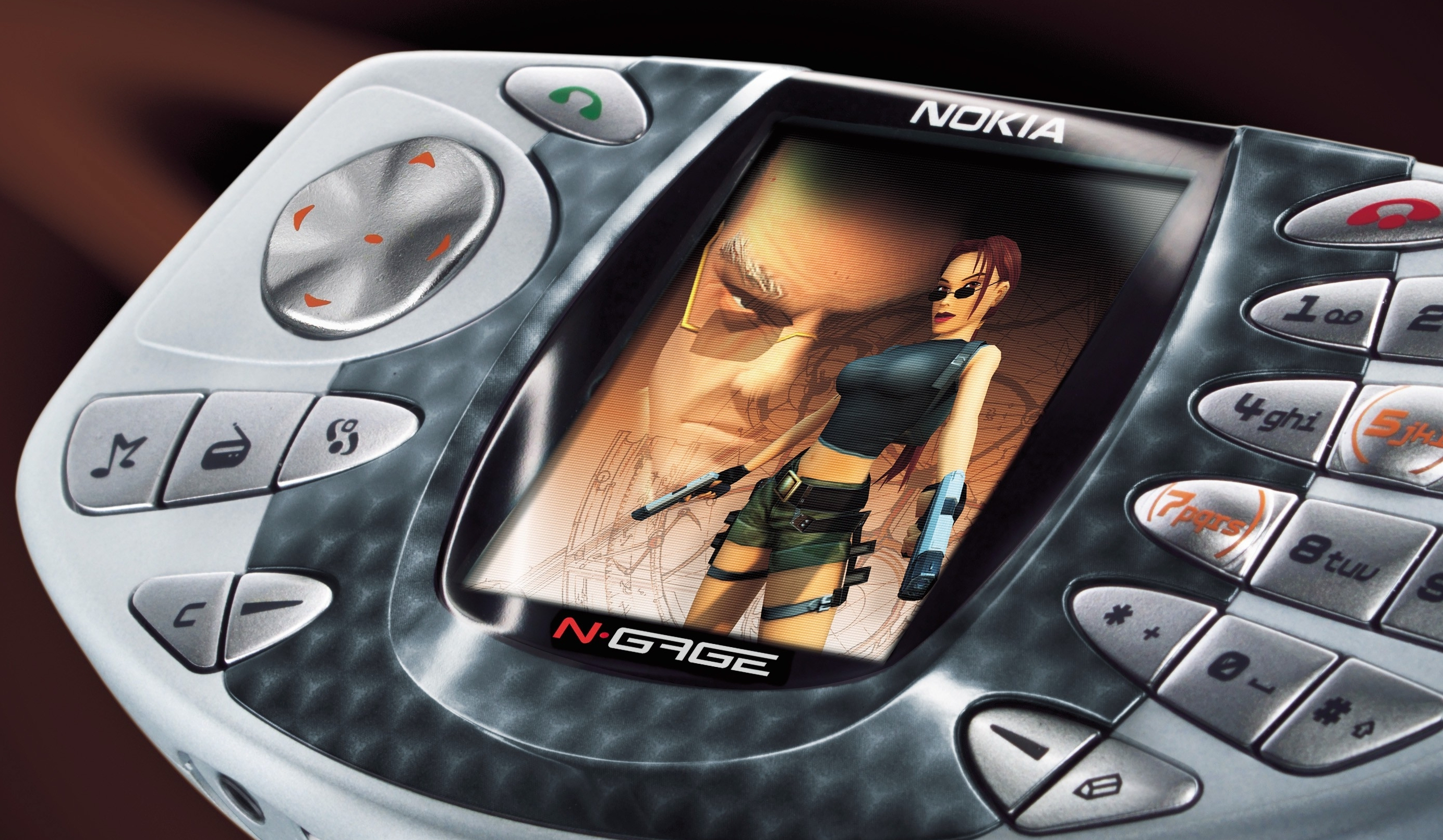 We admit that the idea was good, but there was a mistake in the implementation. The N-Gage was a smartphone developed by Nokia that combined the functions of a mobile phone and a handheld gaming system, announced on November 4, 2002 by Nokia and launched on the world market on October 7, 2003. The original device ran on the Series 60 platform and Symbian OS v6.1.

N-Gage tried to lure gamers, including me, away from the Game Boy Advance with phone features. This failed, partly because the buttons designed for the phone were not suitable for gaming. The original N-Gage was described as resembling a taco, leading to the derisive nickname of the "Taco Phone".

Nokia introduced the N-Gage QD in 2004 as a redesign of the original "Classic" N-Gage, correcting widely criticized problems and design issues. However, the new model failed to make an impact, and with only 2 million units sold in two years, the N-Gage and QD models were a commercial failure, unable to challenge Nintendo's rival.

N-Gage was discontinued in February 2006 when Nokia moved the game's capabilities to select Series 60 smartphones. This was announced in 2007 as the N-Gage platform or "N-Gage 2.0" and is called N-Gage.

A disassembled N-Gage showing all layers of the hardware the N-Gage comes in a wide physical form, including a 2.1-inch TFT display in the middle, a D-pad to the left, and number keys to the right. This type of design was roughly used earlier by the Nokia 5510 mobile phone.

Instead of using cables, multiplayer was implemented using Bluetooth or the Internet (via the N-Gage Arena service). N-Gage also included MP3 and Real Audio/Video playback and PDA-like functions in the system.

In addition to gaming capabilities, the N-Gage was a Series 60 smartphone running Symbian OS 6.1 with features similar to the Nokia 3650 (but without a built-in camera). It was able to run all Series 60 software (except those requiring a camera) and Java MIDP applications. Its main CPU was an ARM Integrated (ARMI) compatible chip (ARM4T architecture) running at 104 MHz, the same as the Nokia 7650 and 3650 phones.

Around 2000, players increasingly carried mobile phones and handheld game consoles with them. Nokia discovered the possibility...of combining these devices into one unit. In November 2002, Nokia announced that it was developing the N-Gage, a device that would integrate these two devices. Its original development code name was Starship. Most of the pre-loaded ringtones and sounds were composed by Markus Castrén, a former demoscene musician who worked for Nokia in mid-2002. He wrote ringtones for both the N-Gage and the Nokia 7600 in a number of popular dance genres, as well as creating a small set of sounds inspired by 1980s arcade games; he composed them in a chiptune style, since in the video games of the time, the music did not stand out in relation to the game. Unfortunately, with its launch price, the N-Gage was not commercially popular, outselling the Game Boy Advance 100 to 1 in its first weeks of availability in the United States. Within 17 days of the game bundle's release, popular retailers GameStop and Electronics Boutique began offering $100 rebates. In February 2004, after four months of the N-Gage not making a significant impact, CEO Jorma Ollila claimed that the device would have until 2005 to judge whether it was a success or a failure. In January 2005, UK sales tracking company ChartTrack dropped the N-Gage from its regular ELSPA chart, noting that "The N-Gage chart, although still produced, no one cares about. Sales of the machine and its software have failed. to have any effect on the market at all." Although it only directly reflects the UK market, some have interpreted the N-Gage as a viable gaming platform as a major blow. Despite this, Nokia reaffirmed its commitment to N-Gage as a platform, to the point where a new version of the hardware was rumored after GDC 2005. In November 2005, Nokia admitted that N-Gage had failed and that it had sold only a third of the company's expectations. The product was discontinued in Western markets in February 2006, but is still sold in India and parts of Asia. Nokia continued to promote the N-Gage at E3 2006. According to Metacritic, the last game released in the US was Civilization in March 2006. In October 2006, Nokia released the final game for the N-Gage QD, Comat Racer Payload to. As of August 2007, Nokia is estimated to have shipped more than two million N-Gage consoles. The "N-Gage" brand name still had a bad reputation in the gaming media and among the few consumers who recognized the N-Gage brand, due to the weakness of the system's first games and the limitations of the original model. Nokia offered more than 50 games for the system. There is some disagreement among sources as to the actual number of N-Gage decks sold. Nokia originally reported 400,000 sales in the first two weeks the deck was available. However, independent market research firms Chart-Track and Arcadia Research claimed that N-Gage only sold 5,000 decks in the US and 800 in the UK during that time. Critics have suggested that Nokia counts the number of decks shipped to retailers rather than the number of handsets actually purchased by consumers. Nokia later admitted that this was the truth. In 2004, Nokia claimed in a press release that it had delivered its millionth board, a milestone for the company despite falling short of the company's original forecast of six million boards by the end of 2004. However, this supplied figure should not give a reliable picture of the actual sales of the deck. Nokia eventually shipped 3 million N-Gage decks by 2007. Pocket Kingdom Own the World received many rave reviews when it was released, and Pathway to Glory was Nokia's first self-published success. Perhaps these games came too late to significantly improve the perception of the N-Gage hardware itself in the eyes of consumers and the press. According to Nokia's forecasts, there will be at least 6 million decks sold in three years, instead of only 3 million. The original phone's taco-shaped design was considered awkward: to insert the game, users had to remove the phone's plastic cover and remove the battery, since the game slot was next to it. Another clumsy feature was the speaker and microphone on the side edge of the phone. This often resulted in many people describing it as talking into a "taco phone" or "Sidetalking", or simply having really big ears because the user held the edge of the phone up to their face to talk into it. Usual for a phone, but unusual for gaming systems, its screen was taller than it was wide, measuring 2.1', with a resolution of 176 X 208, giving an aspect ratio of 11:13; at the time, most televisions and portable gaming screens were 4:3. The new N-Gage, also referred to as N-Gage Next Gen or N-Gage 2.0, has changed in concept as Nokia explained to the world during E3 2005 that they plan to incorporate N-Gage into more of their smartphones. , rather than issuing a specific asset. The new N-Gage platform was completed in August 2007 and was released in April 2008. It was compatible with many Symbian S60 smartphones. The service was discontinued in October 2009. Prior to the launch of Nokia's first in-house N-Gage game, Pathway to Glory, a single-level demo of the game was released to journalists to get a taste of the game and understand the basics of the turn-based wargame. This demo will later be available for free download at N-Gage.com. The 16 MB download size didn't scare fans off to the Pathway to Glory demo. The success of the download paved the way for future titles. On June 6, 2006, Nokia announced that people would be able to purchase the games digitally.