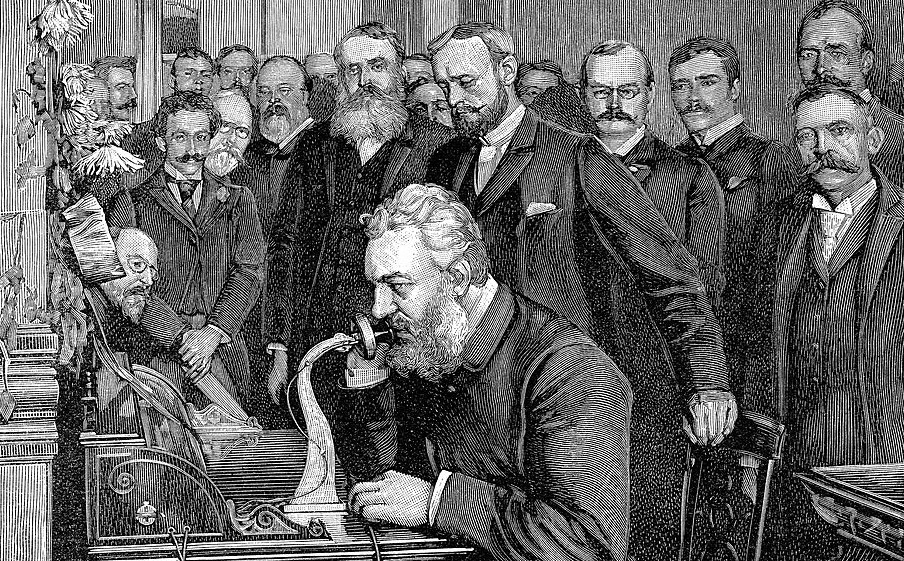 B oston, March 10, 1876. - The first telephone call took place that day, with Alexander Graham Bell's colleague calling Watson in the other room.

“Sometimes leave the beaten path and throw yourself into the woods! You will surely find something you have never seen before. ” That’s one of Graham Bell’s famous sayings, no wonder. With the development of telephony, one of the greatest inventions of mankind has been named.

Born in Scotland, the young Bell studied special education, and in 1863 received a teaching assistant position at the Weston House boarding school in Elgin, teaching music and fine speech. From September 1866 he was a professor at Somerseitshire College in Bath. His interest then turned to electricity, where he installed a telegraph line between himself and his friend's room.

Today, it is almost inconceivable how humanity communicated in front of the phone. It is no exaggeration to say that the device is an important factor in our modern lives without which most of us would find it difficult to manage our daily lives. Until the end of the 19th century, however, the fastest way of communication was by letter, which, although it became faster than before with the advent of the railway, still far from providing the immediacy we are accustomed to.

The discovery of the telegraph made it possible to transmit messages over long distances, and this also laid the foundation for fast communication. But how did technology have to evolve to be able to send and receive voice communications? To do this, we have to travel back to the 1870s, when Alexander Graham Bell, of Scottish descent, worked at the Clarke Institute for the Deaf in Northampton, Massachusetts. There, he met with the president of the institute, a prominent patent attorney, Gardiner Greene Hubbard. The two men were interested in mechanical and electrical inventions, especially telegraphy, writes the ScienceMuseum's online science website.

Alexander Graham Bell’s family, by the way, has been dealing with the question of speech and the physics of sound for generations. According to the MTVA Press Archive, her father taught deaf people to speak, and her mother herself was severely hearing impaired,... so it's no wonder Bell studied to be a speech therapist. And although he did not stand out from his peers as a student, his ingenuity was already evident at that time. When the two people in the harsh climate of Scotland were taken away by lung disease, the family moved first to Canada and then to the United States. Bell became a professor at Boston University at the age of twenty-six, and when he fell in love with one of his deaf disciples, he began with renewed vigor in his research into the mechanics and physics of sound. At first he wanted to perfect the telegraph so that he could send several messages on different frequencies at the same time, but after a while he was already trying to transmit sound on the wire. Not short of ideas but unfamiliar with practical physics, he contracted an assistant named Thomas Watson as his assistant. Bell’s basic idea was that sound waves could be converted into electrical vibrations and then converted back into sound waves again. It was filed on February 14, 1876, and on March 7, it received the patent number 174,465 (the most valuable ever registered), a “method and structure for the telegraphic transmission of speech and other sounds. By means of an electric wave motion similar to the air movement accompanying speech and other sound ”. But it was only hours later that he was considered the father of the telephone today, his name on history, because on the same day in Salem, a physicist named Elisha Gray also applied for a patent for his “spokesman” based on the same principles. After a long and very fierce battle, the patent was finally granted to Bell with proof of filing a few hours earlier. The working phone was born three days later. Legend has it that on March 10, 1876, Bell accidentally poured acid on his pants while experimenting and instinctively called an assistant at the other end of the wire, one floor up, “Mr. Watson, come here, I need you! ” Watson arrived at his death. This is the first phone call. The prehistoric phone, of course, wasn't real yet, transmitting the sound only four miles away — just as it was when the caller's throat shouted into the receiver, practical application was only possible with the carbon microphone invented by Edison. Eventually, this simple phone became a big sensation at the 1876 Philadelphia World's Fair on the 100th anniversary of U.S. independence. The Brazil II. Emperor Pedro, for example, was so impressed that "It speaks!" he even threw it into his hand with an exclamation it was also among the 100 largest in Scotland, Britain, Canada and the United States.