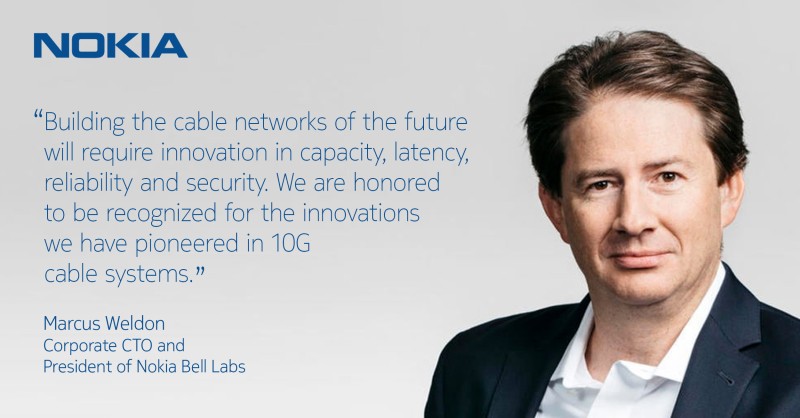 Nokia has announced that it has won one of the first advanced technology awards for this year’s SCRE · ISBE Cable-Tec Expo virtual experience. The virtual format will enable hundreds of thousands of cable professionals as well as technologists, students and other audiences worldwide to take part in the industry's signature event from their homes and offices. Highlights include an opening demonstration of breakthrough technology; 40 Fall Technical Forum workshops featuring 119 presentations; and visionary remarks by many of the industry's most senior executives, including Michael Powell, president and CEO, NCTA - the Internet & Television Association; Tom Rutledge, Chairman and CEO, Charter Communications; Dave Watson, President and CEO, Comcast Cable; and Mike Fries, CEO and vice chairman, Liberty Global.

Espoo, Finland - Nokia has announced that it has won one of the first advanced technology awards for this year's SCRE · ISBE Cable-Tec Expo virtual experience. Nokia has been recognized for its leadership in the Cable 10G initiative, which will provide ten times faster broadband speeds than is available on today’s cable networks.

The simultaneous progress towards 10G in the cable world and 5G in the mobile world are analogous in many ways. They will both deliver significant improvements in speed, latency, reliability and security to drive the next wave of service innovation, efficiency and connectivity in our broadband networks. Nokia’s understanding of both mobile 5G and cable 10G puts the company in a good position to support cable MSOs in leveraging these complementary initiatives.

The Chairmen’s Advanced Technology Awards are presented to an elite group of technology partners who are helping the cable industry bring its new 10G platform to life. These companies are paving the way for cable to deliver residential internet speeds up to 10x faster than today’s networks and are laying the foundation for a host of applications that will change the ways we interact with one another and with the world around us. Nokia is one of a small, select group of technology vendors to have won the Chairmen’s Advanced Technology Award.

Marcus Weldon, Corporate Chief Technology Officer and President of Nokia Bell Labs, said: “Building the cable networks of the future will require innovation in capacity, latency, reliability and security to support the future of ‘Remote X’: the ability to connect, control and communicate to anything from anywhere. We are honored to be recognized for the innovations we have pioneered in 10G cable systems, including novel scheduling methods and the move towards full duplex 10G systems with extended spectrum in DOCSIS® 4.0. These innovations, complemented by innovations in end-to-end 5G networking, are critical to enabling the industrial automation future.”

Tom Adams, Executive Vice President, Field Operations for Charter Communications and outgoing Chairman of the SCTE•ISBE Board of Directors, said: “The emergence of new consumption patterns and behaviors during the pandemic and the rise of cable’s 10G platform have increased opportunities for innovation in telemedicine, aging in place, smart cities and more. Companies such as Nokia are playing key roles in enabling this evolution, and we are pleased to recognize their leadership with this award.”