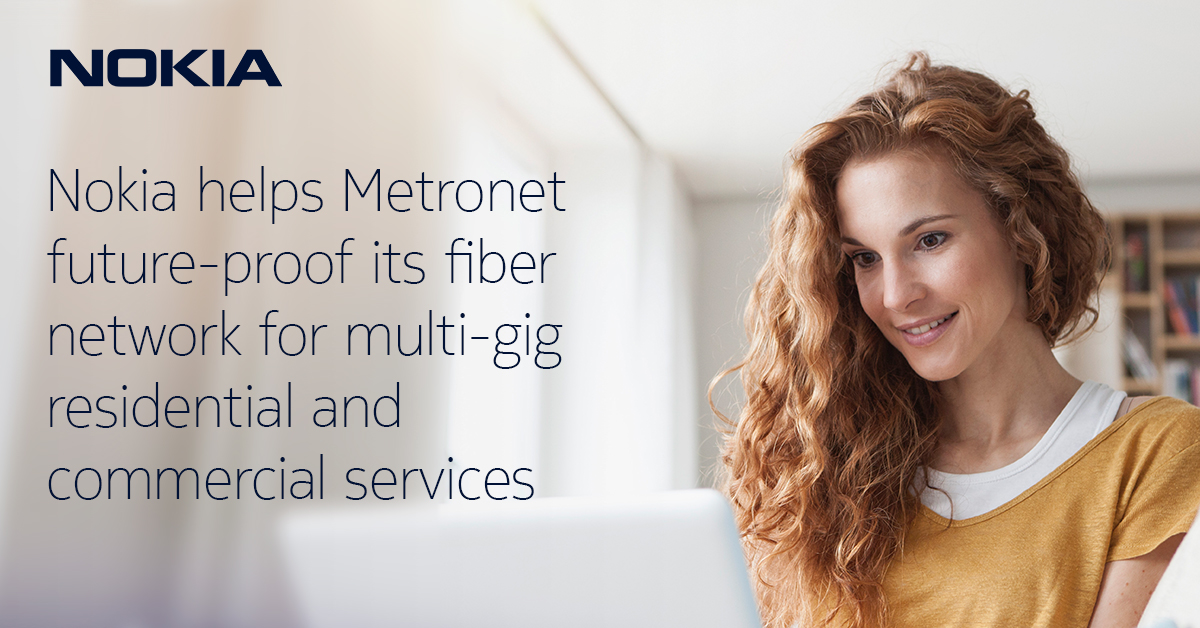 Kevin Stelmach, President of Commercial Markets, Metronet said: “Nokia is our trusted partner, and its technology is enabling us to future-proof our investments in fiber as we continue to expand our network. We are also able to future-proof the cities and communities that we serve with a communications network that can grow with them, encouraging business investment with virtually limitless capacity available when and where it’s needed. We are already getting great feedback from our existing and new business and consumer customers who are excited about the possibility to access more bandwidth at very affordable prices.”

Ed Cholerton, President, Nokia North America, said: “We are pleased to continue our partnership with Metronet to provide a system that not only meets the bandwidth demands of its customers today, but also allows backward compatibility with its existing equipment. Metronet is deploying a system uniquely capable of delivering GPON, 10G PON and 25G PON without having to replace hardware. Metronet is bringing the future of connectivity to cities across the country and using Nokia’s next-gen PON technology to connect underserved regions.”

At Nokia, we create technology that helps the world act together.

As a trusted partner for critical networks, we are committed to innovation and technology leadership across mobile, fixed and cloud networks. We create value with intellectual property and long-term research, led by the award-winning Nokia Bell Labs.

Adhering to the highest standards of integrity and security, we help build the capabilities needed for a more productive, sustainable and inclusive world.

Metronet is the nation’s largest independently owned, 100 percent fiber optic company headquartered in Evansville, Indiana. The customer-focused company provides cutting-edge fiber optic communication services, including high-speed Fiber Internet and full-featured Fiber Phone. Metronet started in 2005 with one fiber optic network in Greencastle, Indiana, and has since grown to serving and constructing networks in more than 250 communities across Indiana, Illinois, Iowa, Kentucky, Michigan, Minnesota, Ohio, Florida, North Carolina, Virginia, Texas, Wisconsin, Missouri, Colorado, New Mexico and Louisiana. Metronet is committed to bringing state-of-the-art telecommunication services to communities — services that are comparable or superior to those offered in large metropolitan areas. By offering XGS-PON technology, Metronet can easily carry its communities into the future of 5GB service. Metronet has been recognized by PC Mag as one of the Top 10 Fastest ISPs in North Central United States in 2020 and Top 10 ISPs with Best Gaming Quality Index in 2021. Broadband Now has recognized Metronet as the Top 3 Fastest Internet Providers and Fastest Fiber Providers in the Nation in 2020, and #1 Fastest Mid-Sized Internet Provider in two states in 2020. In 2020, Metronet was awarded the Vectren Energy Safe Digging Partner Award from Vectren. For more information, visit www.Metronet.com.