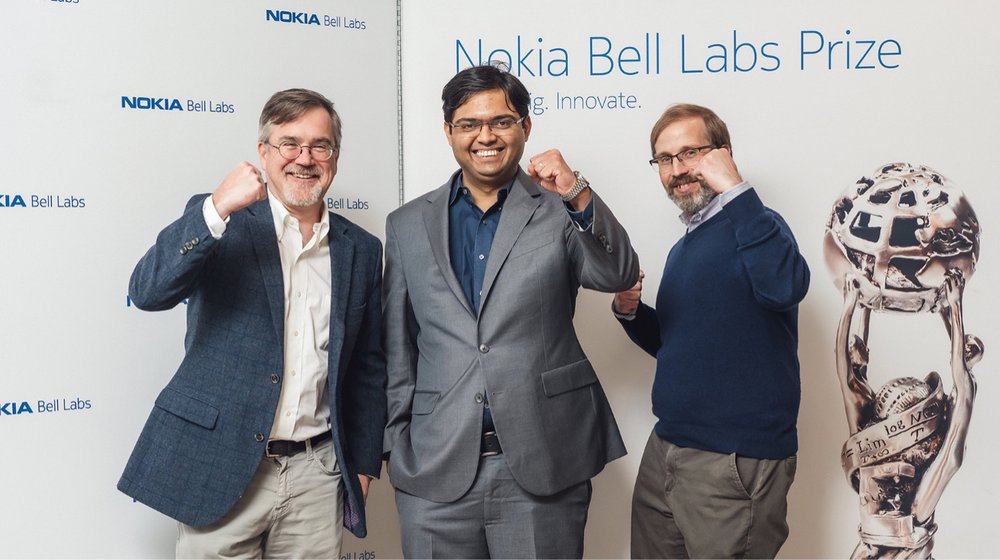 The winner of the 2022 Bell Labs Prize is tackling a challenge unique to the era of big-data computing: the problem of memory. University of Pennsylvania (Penn) professors Deep Jariwala, Troy Olsson and Eric Stach have developed a form of computer memory that integrates tightly with microprocessors. This memory technology would more efficiently handle the computational demands of data-intensive applications, which could go a long way to optimizing artificial intelligence (AI) systems, while boosting the speed of big-data services like search.

“As a society, we are doing computing that is more and more data heavy,” said Jariwala, Assistant Professor in the Department of Electrical and Systems Engineering at Penn. “This is due not just to the smartphone and the internet, but also because connected devices have become so much more widespread. We are generating so much data every day. This has led to the rise of a type of computing that deals with vast amounts of data. Colloquially we call this big-data computing.”

The problem is computer processors today are ill-suited to these new data intensive problems. Computer architectures were originally conceived as number-crunching engines, performing as many possible calculations in the shortest amount of time as possible. Big-data applications, however, are less dependent on the computational power; they rely on a computer’s ability to quickly transfer data in and out of the processor.

“To do its work, a machine learning or AI application needs to move a bunch of data into the processor, it does a little processing on that data, and it stores that new set of data in memory – then it does it again,” Jariwala said. “The computation gets choked or slowed down by the need to keep moving these vast sets of data around.”

What’s needed is a computing architecture designed specifically to handle the needs of big data. And that’s exactly what three Penn researchers have set out to build.

Olsson, Associate Professor in the Department of Electrical and Systems Engineering, and Stach, Professor in the Department of ... Materials Science and Engineering, worked with their Penn colleague Jariwala to develop a prototype ferroelectric-diode-based memory device. The device combined with a new memory architecture accomplishes two things. First, it moves memory closer to the processing source, integrating it directly over the silicon microprocessor. Second, the architecture allows for many processing functions to be performed in the memory itself. While neither of these two concepts is new, Jariwala said, they have been largely unachievable in the past due to challenges of heat, power, fabrication methods and compatibility with existing silicon processor chip fabrication processes. But the team was able to overcome those barriers by working with a relatively new semiconductor alloy based on aluminum, scandium and nitrogen to develop their diode material. The result is an ultra-high-density, ultra-low-power memory device that allows for the processing of reams of data much faster than traditional compute architectures. The solution has great potential because it can be fabricated using today’s processes. Achieving that result was certainly not been easy though. Shortly after Jairwala, Olsson and Stach received their first grant to conduct research into the process in 2019, the pandemic struck, effectively locking them out of their labs. After Covid restrictions eased, the three Penn professors, their post-docs, and their students performed the research equivalent of a marathon to achieve the experimental proof that they presented for this year’s Bell Labs Prize. Despite those initial setbacks, Jariwala said they are now back on schedule to commercializing the new memory architecture in the next 5-10 years. They are talking with several semiconductor companies, Jariwala said, as well as discussing future collaboration opportunities with Nokia Bell Labs. Located in Philadelphia, the University of Pennsylvania (commonly known as Penn or UPenn) is one of the oldest and most important private universities in the United States. Along with Harvard, Yale, Columbia, Princeton, Brown, Dartmouth College and Cornell, it forms the Ivy League. Penn was founded in 1740 as the "Academy of Philadelphia" under the influence of 18th and 19th century figures such as Benjamin Franklin. In 1909, Howard Taylor Ricketts discovered the microorganism that causes purple fever, the same year it was recorded. Currently approx. It has 4,500 teachers, 10,000 full-time students and the same number of continuing education students. The University of Pennsylvania School of Law, also known as Penn Law, is also located in Philadelphia, Pennsylvania. Penn Law dates back to a series of lectures in 1790 by James Wilson, one of the signers of the Declaration of Independence and the United States Constitution. It began offering a full-time graduate program in 1850 under the direction of George Sharswood. In 1900, the new law school building (now known as Silverman Hall) inaugurated its current location on the Penn campus, a massive Georgian-style brick and lithographed stone structure. Its alumni include several US Supreme Court justices, including Owen Roberts and founder James Wilson himself.